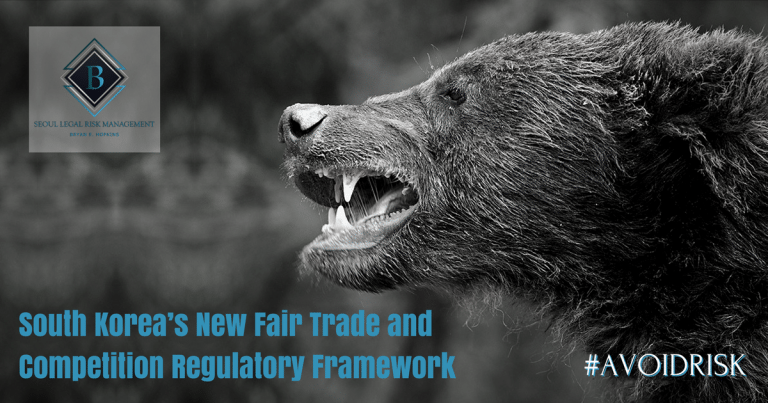 In an effort to follow through on his populist promises, President Moon Jae-in and his administration have pledged to achieve “economic democratization” by rolling out changes to competition regulations and by strengthening the fair trade regulatory framework. These changes are likely to have a significant impact on compliance requirements and should be monitored closely by corporate leadership and risk management professionals.

The suggested changes include:

1. Strengthened investigatory and enforcement powers granted to the Korea Fair Trade Commission (KFTC), including a stepping criminal enforcement capacity, and a stricter regulation of conglomerates (chaebols) to ensure transparency in their corporate governance structures.

2. Prevention of abuse of superior economic power. They include:

a. Criminal sanctions for obstructing KFTC Investigations. Amendments to the Monopoly Regulation and Fair Trade Act (MRFTA) took effect on July 19 of this year that substantially increased the penalties for spoliation of evidence (i.e. tampering or destruction of evidence) or refusal to submit information/materials in a KFTC investigation.

b. Expansion of punitive damages to competition laws. Punitive treble damages have been newly introduced in amendments to various regulations, such as the recently amended Fair Retail Agency Transactions Act (FRATA) - under which retail agents may recover up to three times the damages incurred due to forced purchase or provision of economic benefit in violation of the FRATA. The amended Product Liability Act (PLA) which becomes effective in April of 2018, also introduces punitive treble damages and lowers the burden of proof for product liability claims.

In addition to its measures to prevent abuse of superior economic power (which will focus largely on the conglomerates), it is likely the Moon Administration will also regulate questionable practices prevalent among Chaebols.

After considering whether to eliminate the KFTC’s exclusive right to refer antitrust cases to the Prosecutor’s Office, the Chairman of the KFTC created a task force to consider potential reforms to the overall enforcement of antitrust laws in Korea. The task force, led by the Deputy Chairman of the KFTC, consists of government officers, professors and private sector professionals, including the leadership of NGOs.