Peace at What Cost? The Risks of Appeasing North Korea 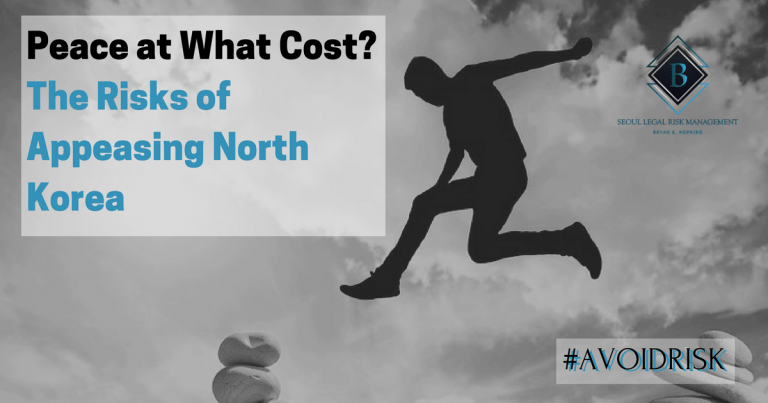 There are many kinds of risks facing companies on a daily basis.  Geo-political risk is definitely one of them and it is a major risk that companies and countries alike must navigate.

President Moon Jae In has long called for peace on the peninsula.  But at what cost? Does this peace include the US leaving the peninsula?  What does denuclearization really mean? North Korea has in the past claimed that it will only give up its nuclear weapons if  the US leaves the Korean peninsula

It appears that the US and Japan’s hard line against North Korea may have resulted in Kim Jung Un and Moon Jae In’s inter-Korean summit, but the summit has also resulted in differing state goals for South Korea and the US.  It is highly possible that North Korea has achieved its goal of driving a wedge between the US and South Korean, something that it has long wanted to do. So where does this leave us?

Some may remember the “Peace for Our Time” by Neville Chamberlain speech prior to WWII.  Are we facing another “peace in our time” moment? Or are all the parties sincerely trying to solve the geopolitical risks in the region?