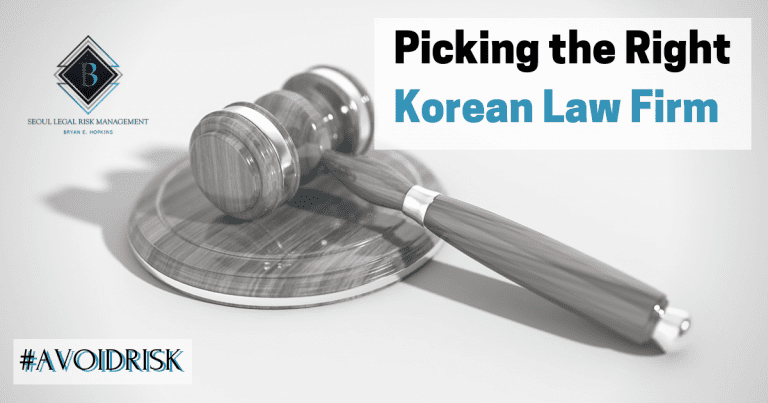 Picking a law firm in Korea has been the topic of a number of articles and books. In Chapter 30 of his book, Doing Business in Korea, Tom Coyner describes the trials and tribulations of picking the right law firm in Korea. He opines that some (if not many) domestic and international lawyers are commercially incompetent, as many Korean attorneys fail to appreciate the commercial context in which they offer counsel. In his Korean Law Blog, Sean Hayes has also written about the importance of selecting a commercially competent lawyer when looking for counsel in Korea.

Failure of appreciating or understanding the commercial environment in which one operates is not unique to Korean lawyers. I’ve witnessed firsthand lawyers in other jurisdictions, including the US, act as if they were giving legal advice inside a vacuum. However, I firmly believe that Korean law schools which, until recently, failed to emphasize the commercial/international nature of legal practice in Korea, are partly to blame. As Korea’s economy is primarily export driven, the legal market is less competitive than in other jurisdictions in Asia, such as Hong Kong and Singapore, which are known for producing internationally focused lawyers schooled in common law.

Be that as it may, picking the right law firm in Korea is like picking a law firm in other jurisdictions. It is up to the manager or in-house counsel to meet with Korean lawyers and determine if they are a good fit. One should ask plenty of questions, get referrals, and look at trade journals and publications to get an idea of which firms are known for their international expertise.

Remember, in Korea, be particularly careful as only a handful of firms dominate the legal market.

I will blog more on picking law firms and law firm management in the future.