The Many Obstacles to Blockchain Adoption 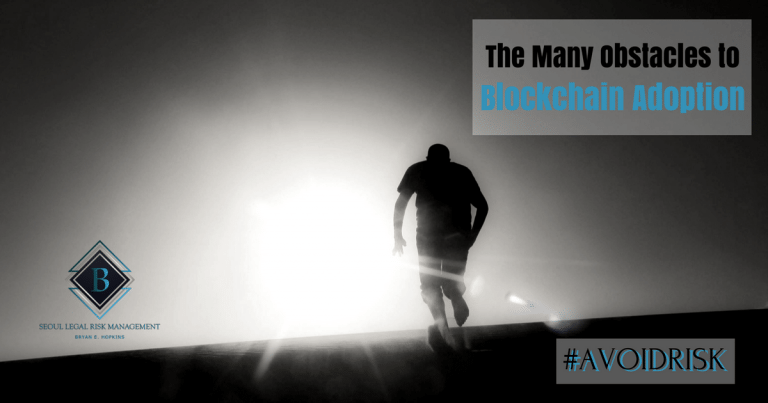 With the boom in Bitcoin and other blockchain-based cryptocurrencies, industries of all sorts are seeking ways they can apply blockchain to automate transactions. As a cryptographic technology that provides for the validation of information without human input or review, blockchain has the potential to revolutionize the practice of law, the concept of contracts, the insurance industry, the banking and finance industry, along with any other industry relying on certification from neutral third parties.

That being said in its current state blockchain presents a wide array of risks and concerns. Here are just a few:

Unlike typical agreements, a blockchain agreement cannot be revoked.  Traders using blockchain technology cannot revoke the trade once it is done as well.

Currently blockchain technologies do not address governance issues. Businesses using blockchain will have to decide what governance processes will apply before implementing blockchain transactions. Also, blockchain deployments could result in the equivalent of a contractual arrangement where none was intended.

Blockchains do not recognize jurisdictions. Hence, they could be used to transmit personal data in violation of data privacy laws.

Most jurisdictions have a defined law of contracts requiring numerous elements for contracts to be legally binding.  Blockchain technologies disregard some of the elements, making it hard to enforce contracts.  For instance, most jurisdictions require that the identity of the contracting parties and legal status of the parties be known prior to execution of the contract.  However, simple contracts created by blockchain technologies may be entered into anonymously.

No one knows who the other contracting party is, making it hard to enforce contractual terms and hard to litigate if the contract is broken.  It is also hard to determine whether parties to a contract in blockchain have the legal authorization to enter into a contract as well.

Blockchain technologies promise to revolutionize many industries and business practices. However, prior to actual implementation a  a wide variety of issues  will need to be resolved.